How to increase IQ simply - IQ test scores can be enhanced through working memory exercises including the Dual N-Back game, where a participant simultaneously hears letters and sees spatial locations one after another. Find out more in this article.

How to Improve Your IQ Test Score

There are many brain training apps and websites around, including Lumosity, which claim to be able to train your brain and potentially enhance your IQ. If you want to know how to increase IQ, you may have seen another of the articles on this site – Does IQ matter? And do programs such as Lumosity work?

High IQ is a valuable property with numerous benefits including general happiness, health and economic benefits. It’s not surprising that asking if IQ matters has been a fundamental question of both theoretical and practical interest. Can human cognitive capacity that allows learning, memory, thinking and performance be enhanced in adults?

Previously it was thought that the combination of genetics and early childhood environment factors determine the life-long cognitive capacity and intelligence level of an individual. As noted in the Definition of Intelligence and Does IQ matter? Sections of our site, standardized intelligence quotient (IQ) scores forecast performance on an extensive range of cognitive tasks as well as working life achievements, and so IQ scores are often used as a measure of person’s cognitive abilities.

Earlier studies have shown that IQ scores measured in childhood correlate firmly with the IQ scores tested in late-adulthood. One study based on the Scottish Mental Surveys showed an IQ test score correlation of 0.77 from ages 11 to 77 in a longitudinal study. [1]

These findings suggested that the major variation of general cognitive abilities between individuals is determined by late childhood or early adolescence. The correlation was shown to be especially strong for fluid intelligence relative to crystalized intelligence. This is because the scores testing crystallized intelligence can be enhanced, for example, by vocabulary training. The results also emphasized the fixed nature of fluid intelligence. [2][3]

IQ Test Scores Can Be Enhanced Through Working Memory Exercises

In recent times, evidence has emerged that has shown some plasticity in IQ and its neural bases. Verbal and performance IQ scores have especially shown fluctuation through the teenage years rather than remaining static. [5]

It was in 2008 when Jaeggi and her colleagues published their revolutionary results that indicate adult fluid intelligence and IQ can be enhanced by a specific cognitive training program. [6] In the study, young adults performed working memory exercises for about 25 minutes per day for up to 19 days. The training method used was “Dual-N-Back” game.

In the Dual N-Back game, a participant simultaneously hears letters and sees spatial locations one after another. The challenge is to respond whenever a presented stimulus was identical to the stimulus n trials ago. For example, in dual 2-back game, subjects respond when the current spatial location or the auditory stimulus matched the ones from 2 trials earlier. An example of similar games can be found in Lumosity and the like.

The training rapidly improved performance on the trained working memory task but it also increased the post-training fluid intelligence (the study concentrated on the fluid intelligence - they didn’t test IQ score). However, it does seem to indicate that this is one way of how to increase IQ.

The figure below shows working memory exercise performance gains across training sessions in a 2013 study trying to replicate the results from Jaeggi et al. In this study, working memory was significantly enhanced, however, no improvement in fluid intelligence was observed. [7] 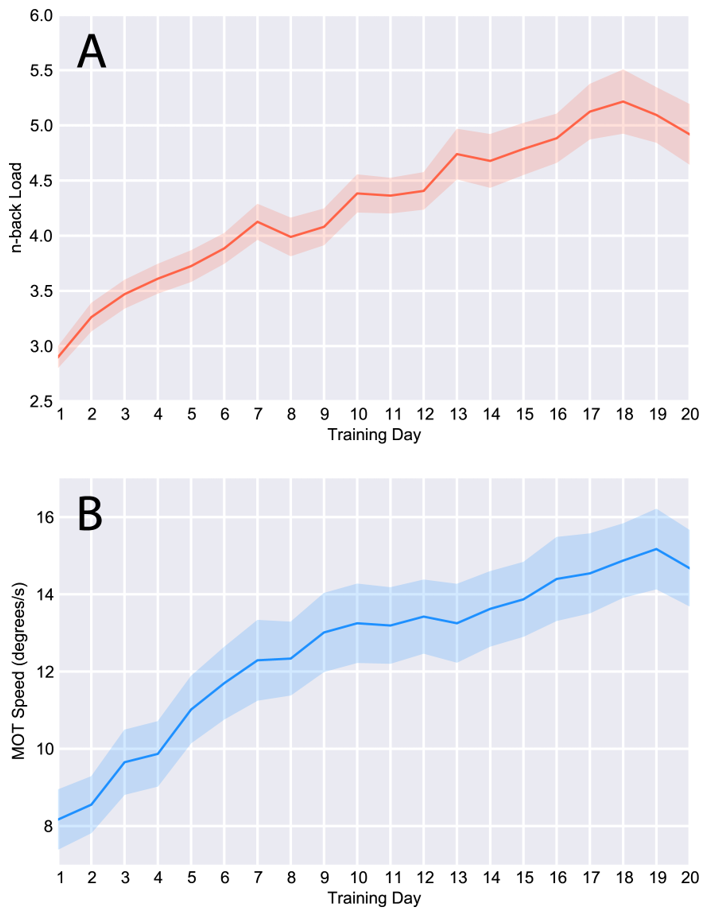 IQ test scores can be increased by working memory training

A Meta-analysis in 2014 confirms the results

Meta-analyses offer the most reliable data and highest-grade scientific evidence as they combine the results from multiple previous studies. A meta-analysis in 2014 focusing on n-back training and fluid intelligence as an outcome measure found a significant positive effect of working memory training on fluid intelligence. [8]

They meta-analysis included studies with a control group and healthy participants between 18 and 50. Altogether 20 studies met the inclusion criteria. It was discovered that n-back training has a statistically significant net effect on fluid intelligence equating to 3-4 points on a standardized IQ test. Interestingly, the net positive effect can be even more significant as the researchers conclude:

“Taken together, we expect that the results reported in this meta-analysis represent a low-end estimate of the true extent of improvement that n-back training can have on measures of Gf.”

As working memory training has shown its efficacy in increasing IQ in adults, interest has emerged in using the same method in childhood, which is a phase of rapid development in many aspects.

What is my IQ?

Do you want to find out your current IQ score? You can try out our online tests by clicking on the link below!

How to increase IQ
Take our
online IQ test now →