These days, IQ is used as an estimate of a person's general intelligence as relative to other people. As raw scores from the standardized tests are distributed normally (i.e. Gaussian distribution), it has been agreed that the median raw score of the sample population refers to IQ 100, with one standard deviation equaling to 15 points in the IQ scale. 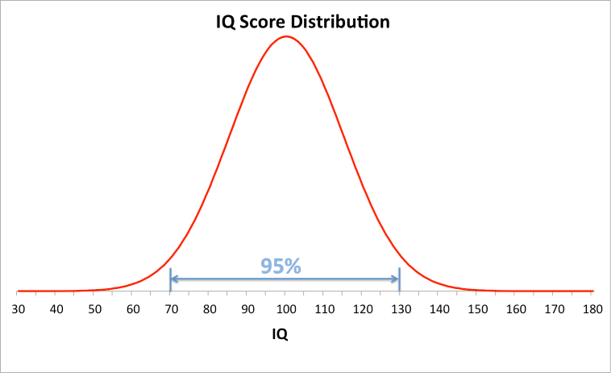 This means that by definition, an average person has an IQ of 100 and about 95% of IQ scores fall between 70 and 130. The IQ scale is a relative measure. People with the highest IQ are, in theory, more intelligent than those with an average IQ.

For example, IQ 132 means one has been estimated to have a higher intelligence level than 98% of people but doesn’t itself tell anything on a person's absolute problem solving or logical reasoning capabilities, but just relative to the peer group. The Mensa IQ test can only be passed by those with the highest IQ.

An example of a commonly-administered standardized test is the Wechsler Adult Intelligence Scale (WAIS). It tests fluid intelligence on a performance scale and crystallized intelligence on a verbal scale. The raw scores of both sections are added up then turned into IQ score.

Where do you think you fit in the IQ range? What's your IQ score? Are you at Genius level? Check out our cool intelligence tests to see what your score would be.