An IQ test for kids can measure cognitive abilities and potential, which can have a huge impact on their academic and social development.

An IQ (intelligence quotient) test is used to measure intelligence. Testing nonverbal reasoning, problem solving, working memory, and spatial skills is the fairest way to analyze intelligence, as no knowledge-based questions are required. For children, this is extremely useful, as they will not have the life experience or vocabulary of an adult.

IQ scores on intelligence tests are normally distributed over a bell curve pattern, meaning that while most individuals score close to the average, some have significantly higher or lower scores. Generally speaking, intelligence tests are designed to assess how well an individual can solve problems and interpret information in various ways; however, it is important to remember that intelligence falls on a continuum and is rarely ever perfectly represented with just one number. Intelligence testing for children can help identify areas where further development may be beneficial or needed in order to leverage existing talents in different areas.

How do kids fare on IQ tests compared to adults?

Some intelligence tests are designed specifically for children, but it is perfectly possible for a child to attempt an "adult" standard IQ test. Generally speaking, intelligence scores tend to peak in the mid-teens and then gradually decline as people approach adulthood. It is important to remember, however, that intelligence is more than just one number. Intelligence is the capacity to learn and adapt, something that even IQ tests cannot measure accurately.

What's more, intelligence can differ significantly from person to person and can even change significantly over time depending on a range of environmental factors. Therefore, although intelligence tests can offer an accurate snapshot of someone's current intellectual capacities, they are by no means infallible when it comes to definitively measuring intelligence or determining its exact trajectory over time.

That said, the results of an intelligence test for kids can show the current trajectory a child is on, offering useful insight into potential areas of development or improvement.

What are the benefits of an IQ test for kids?

Intelligence tests for kids are an excellent tool for gaining invaluable insight into a child's cognitive abilities and skill, which can have a huge impact on their academic and social development. By understanding a child's strengths and weaknesses, parents and teachers can tailor their educational approaches to best meet the needs of that particular student. Additionally, intelligence tests can help identify whether they are a gifted student or if there are any areas of difficulty or developmental delays that may be impacting a child's learning. Ultimately, they are an important tool in helping children reach their full potential.

By building confidence in their strong suits and working through challenging areas, children can become well-rounded learners who are better equipped for success.

How can parents help their kids prepare for an intelligence test?

Preparing for tests can be a challenge, but parents play an important role in helping children find success. One way to help is to ensure that your child is well-rested prior to the test. Poor sleep has been shown to impair performance on intelligence tests, so making sure your child gets enough rest leading up to their test is key.

Additionally, it may be helpful for parents to provide their children with a practice test before taking a full test. Working through sample questions in a practice test and gaining familiarity with multiple-choice questions can help boost confidence ahead of exam day. 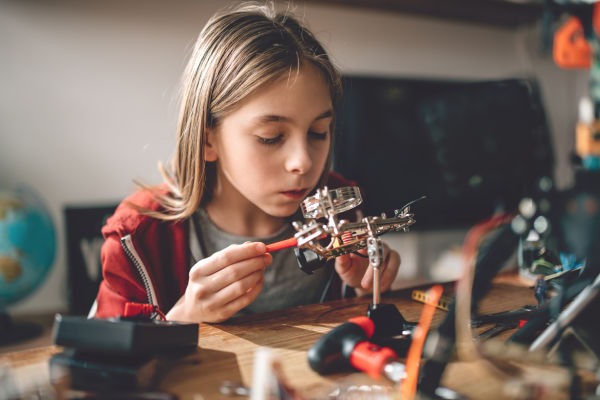 If your child is feeling nervous about the test, try not to downplay these feelings. Instead, reassure them that they're prepared and have what it takes to perform successfully on the intelligence test. Ultimately, parents can provide invaluable support by helping their kids feel confident and ready before taking an intelligence test, and they need to remember that an IQ score isn't the only factor that matters in life.

You can read our full article about how to improve your test score here. Preparing well as a child continues to provide benefits into adulthood, so it is worthwhile making sure your child has the best chance of success. With the right preparation and attitude, kids can use intelligence tests as a tool to reach their full potential.

Is intelligence related to verbal comprehension?

Simply - yes and no! In day to day life, understanding verbal commands is important. However, it is not an indication of true intelligence. Processing verbal instructions is a significant part of cognitive development, but problem-solving is the true test of cognitive ability. That's why a culture fair test that doesn't require prior knowledge or verbal comprehension is a better way of understanding the cognitive ability of a child.

Some tests will equate mental age with intelligence, and might suggest that a 7-year-old has the mental age of a 20-year-old. In other cases, the mental age might appear lower than physical age, which could bring questions about a learning disability, autism, or a range of other conditions. Low IQ and lower mental age can be highly correlated, but the intellectual ability of a child can change rapidly.

Infants learn extremely quickly, although it may not appear as such. Understanding how to live in a brand new world takes extreme mental acuity, and academic achievement is secondary to this. Is a child that can tie their own shoelaces more intelligent than the one that can multiply numbers quickly? No - but both are aspects of intelligence.

Are there any downsides to taking an IQ test for kids?

While intelligence tests can provide valuable insights into a child's abilities and skills, they can also create problems. Taking intelligence tests at an early age may cause young children to feel pressure to perform well in order to receive positive feedback from a parent or teacher. This pressure can be harmful as it might cause the child to become anxious or fearful of failing, and mental health is far more important than knowing your exact IQ score.

Furthermore, intelligence tests may bias our view of the world by emphasizing intelligence at the expense of other characteristics, such as creativity and social intelligence. This means that intelligence tests alone do not give an accurate measure of the complexity and breadth of intelligence, which is why it's important for parents to discuss their child's responses in light of other factors, such as mental health and academic achievement.

An IQ test for kids can be beneficial when administered properly, but it is essential that parents bear in mind their potential risks before deciding if they are suitable for their children.

IQ testing is a measure of cognitive abilities and potential. Kids often fare well on IQ tests compared to adults as their problem-solving skills are used more often. A gifted child can even beat the average score for adults!

The Wechsler Intelligence Scale for Children (WISC) and Stanford Binet Intelligence Scale (Stanford-Binet) are the most commonly used intelligence tests to measure a child's cognitive abilities. WISC is tailored specifically for children between 6 and 16 years of age while Stanford-Binet is appropriate for those aged 2 to 7. While providing similar results, the tests are different, which means the results are not directly comparable.

There are benefits to taking an IQ test for kids, including helping them prepare for an achievement test or an academic competition while providing feedback about their strengths and weaknesses.

Ultimately, whether or not you decide to have your child take an IQ test is a personal decision. If parents want to test their children, they might want to contact a professional psychologist who could arrange for their kids to take an IQ test that is designed for children. If you do decide to go ahead with it, you can start with a free IQ test or a practice test, as it is not necessary to get full details about your child's IQ level to begin with.

As they develop, you can pay for an in-depth IQ test to further explore their intelligence. Remember that a good parent is the best guide - focus on your child's mental health, show interest in their schoolwork and hobbies, and support their development as much as possible.

Whatever your age, you can start testing your IQ now. Why not give our test a try?